So...wall mounted light fixtures.
I adore them for their functionality and clutter-reducing, space saving-ness. They're great for small spaces, and great at putting light exactly where you need it for reading or whatever, but it's one of those categories of lighting where there's just not that much available to choose from to begin with, and where to get something cool, you've got to spend a fortune.
And I say boo to that.

Now, you may recall that my quest for fixtures in this genre for our bedroom led me to one of my now infamous IKEA hacks, the desk lamp as wall-mounted bedside reading light, a nifty little adventure that's still one of my most favorite, functional and money saving tricks ever. And just about ever since we've gotten settled here at Modern in MN, I've been on the lookout for another pair of wall mounted lights for our media room to serve a similar purpose.
I had almost pulled the trigger on some from West Elm, but they weren't exactly what I was looking for and for the last few months I had been trying to find time to get over to the store and see them in person, which never happened (and checking just now, they're not on the website anymore anyway).

In the mean time, I happened to be at IKEA, looking at lighting for another reason, and came across some desk lamps, TERTIAL, for $8.99. It was a great deal that I couldn't resist, and although I ended up not using the one I bought in the art show display for which it was intended, it found a great home as a much-needed reading lamp clamped to one of the side tables in our otherwise task light deprived media room.

Here it is, the object of my latest affection, IKEA's TERTIAL drafting table-style lamp: 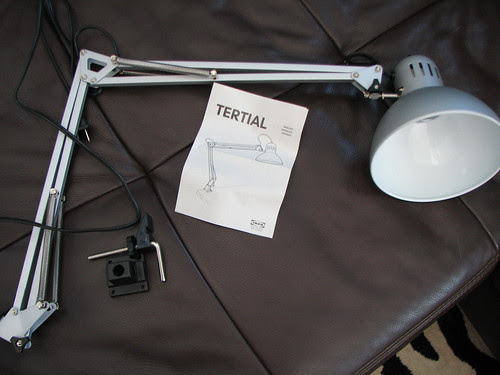 And here's what my single, original TERTIAL was doing before yesterday, installed as intended: 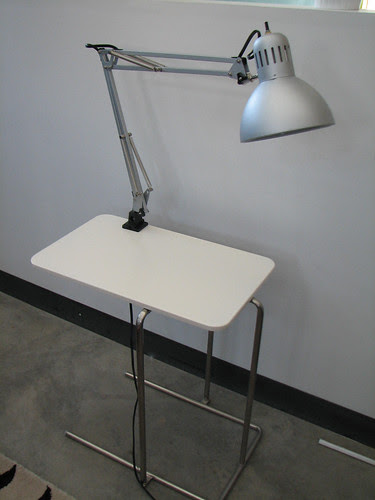 Love that classic, modustrial, form-follows-function look, and the twisty, turnie, bendy adjustability was exactly what I was looking for in task lighting for the media room.
Yet the second I took it out of the package, I knew it had potential way beyond an ordinary clamp-on lamp so I bought another one on my next IKEA run.

First, it just so happens that IKEA was genius enough to put a little hole in each corner of that bracket, presumably to allow one to screw rather than just clamp it to a table. And it also just so happens that the bracket was designed to hold the lamp either horizontally or vertically.
Dingdingdingding!
I took advantage of both of these points by screwing that painfully clever little bracket to the wall with the help of some drywall anchors (and Boy in his action hero gloves): 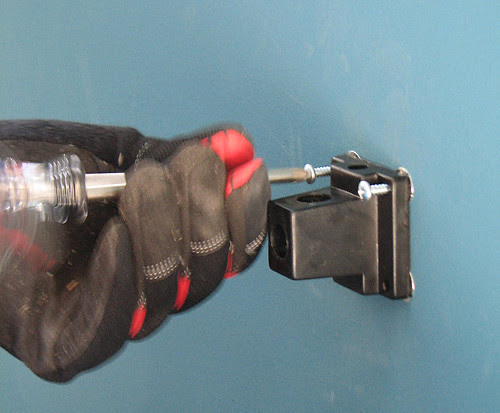 (I should note here that a less lazy person would have made a little backer piece to go between the bracket and the wall to cover up those anchors you see peeking out. I decided I could live with it as is.)
Then, just insert lamp into bracket and TaDA! Instant wall lamp: 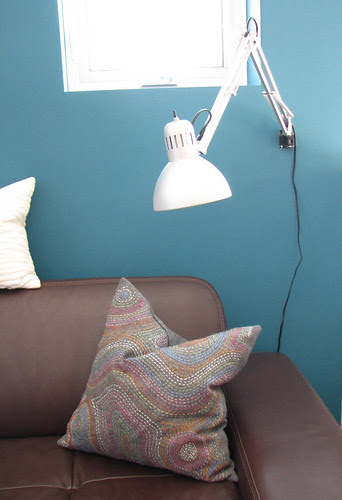 Cool, huh? But it gets better!
That dangly cord situation bugged me, and although a bit of careful routing and tacking down would have helped, I wanted something that looked as tidy and as close to permanent as possible.
And then I spotted the perfect opportunity to elevate this simple hack to the level of fabulous, and I took a deep breath and cut the plug end off the cord: 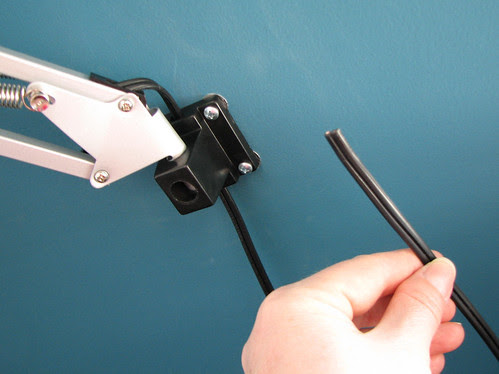 This allowed me to thread the cord through the unused hole where the clamp part of the bracket used to go: 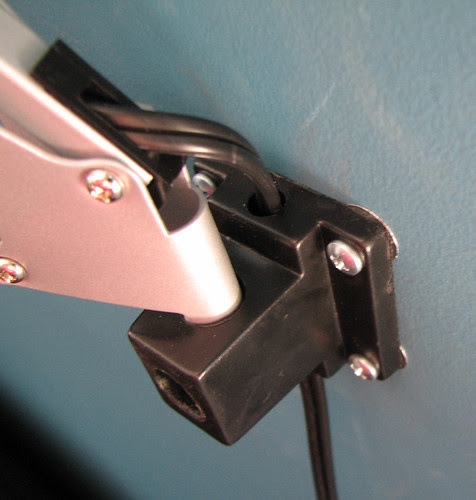 So now, instead of having to route the cord around the bracket from the top, it goes neatly through and comes right out the bottom.

One cord issue down, one to go.

Enter Wiremold, a wall lamp lovers secret. Basically, it's a paintable tube of plastic with a slot along one side that you can slip a cord into for a more finished look. It attaches to the wall via a sticky backing, can be cut to length, and is available at any hardware store or home center. They even sell elbow pieces: 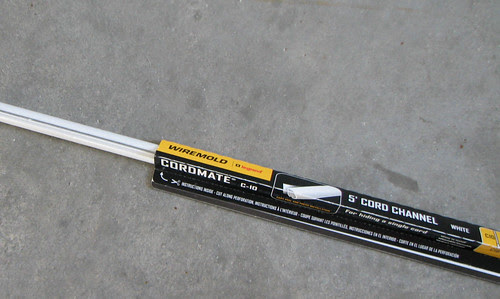 Here's mine installed, happily concealing the lamp cord and waiting for paint: 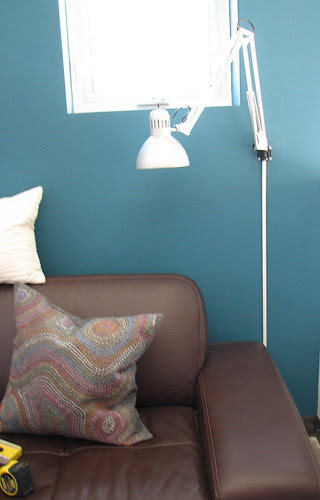 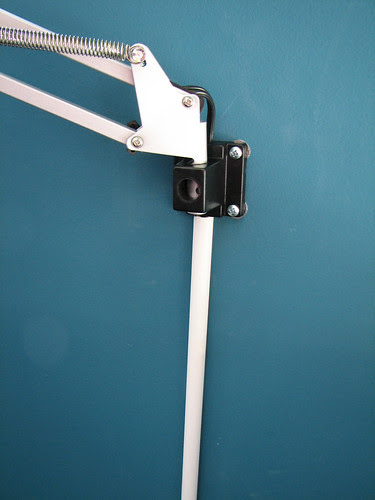 Looks almost like the lights were made for this, doesnt' it?

A quick trip to the hardware store for some replacement cord ends (if the wiring part of that scares you, check out this link, or this post for help. They cost just a buck or two and it's really a simple little procedure to put them on, trust me) and a bit of paint on the Wiremold, and it's a fabulous finished project: 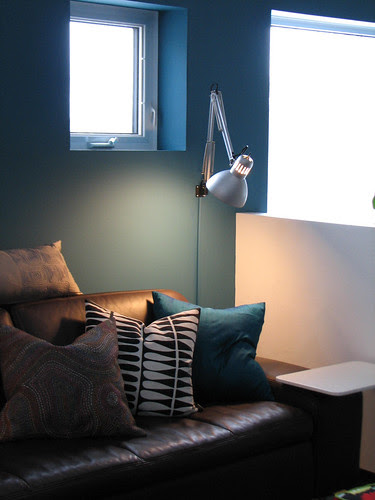 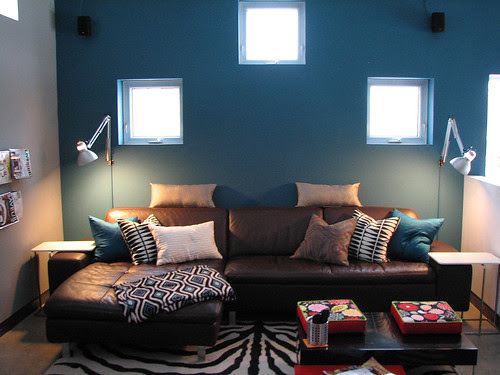 I think for ~$25, this hack is pretty darn great...the lamps are exactly the look I was after plus they're perfectly, fantastically functional. Makes me want to curl up on the sofa with a good book right now!
splatgirl at 10:50 AM 21 comments:
‹
›
Home
View web version